Some Ubuntu links of interest

I wanted to post some links that I found helpful in my endeavors with Ubuntu Linux so far.

Adventures in Linux with Ubuntu :)

Finished my contract at Thomson West

Well, yesterday was my last day at Thomson West in Eagan. Good 6 month gig. Went in, built some new functionality for a new product that Thomson West is coming out with, and got out. The middle part of the summer was a bit hairy (I worked a couple of 45-52 hour weeks), but for the most part, it was a very straightforward project.

I think the big take away for me on this project was how well Spring Framework worked We had one, I said one, EJB...a message-driven bean. The rest of the system was built using normal Java objects configured in Spring application context files. This allowed us to concentrate on building business logic and not worry about EJB/J2EE issues. We also did all of our testing outside the J2EE container (in this case, the J2EE container was IBM WebSphere Application Server 5.1.2). A nice side effect of all this was that myself and another senior developer could use our Java IDE of choice--JetBrains' most excellent IntelliJ IDEA.

Spring was a big differentiator for that project--it allowed us to build value and deliver value to the client, thus building confidence in the client with regard to our abilities and skill levels. The group that I consulted with are super happy with how well Spring worked on this project and will be integrating Spring into more of their applications and ridding themselves of EJB cruftiness over time. I don't get the sense that they're interested in any of the EJB 3.0 stuff coming out and will stick with Spring and best of breed tools and frameworks in the future. The way it should be. Thoroughly enjoyable!

Next up is UnitedHealth Group's Ovations division. Big change here--.NET Framework, ASP.NET, AJAX. Looking forward to the challenges this new opportunity will present.
Posted by Unknown at 10:33 AM 3 comments:

Well, it's been about a week that I have been working with Ubuntu Linux "Dapper Drake" on one of my desktops here at home. I'm thoroughly impressed. I've used RedHat and Fedora Core distros before and have been satisfied with them. Never super impressed, but satisfied. SuSE seemed slow to me so I really didn't invest much time in it. Tried Dapper Drake on a laptop that had a hosed Windows XP installation on it. Dapper Drake worked well on it, and after I bought a Netgear wireless adapter for it that Dapper Drake instantly recognized, I was off to the races with Dapper Drake.

After messing around with the Drake on this smallish laptop, I decided to install it on development desktop that currently held Windows XP Professional. It was my thought to dual boot this system, but for some reason, the Windows XP Professional installation would die during the boot process. OK, I thought, I wasn't really using Windows here much anyways, and I still have my Dell XPS system for a Windows installation. So I reformatted the Windows partition to a Linux partition and mounted it to the filesystem.

I've gone to installing Kubuntu on both of my Dapper Drake installations. I think I resonate with KDE more than GNOME. I really like the kdesvn integration into Konquerer. Much like TortoiseSVN in Windows. Ripping some albums to Ogg format and amaroK is very cool. I have my Java development tools installed (IntelliJ IDEA, DbVisualizer, Eclipse 3.2+Callisto). I've been using Java 6 Beta 2 on this box and it's working like a dream.

Definitely recommend Dapper Drake to those out there that want a no-nonsense Linux installation that's super simple to upgrade and install packages on.
Posted by Unknown at 10:20 AM 1 comment:

I've now seen this behavior a couple of times on both Windows and Linux versions of Firefox. For some reason, unknown to me, Google's Browser Sync plugin gets a wild hair and deletes almost all of my bookmarks when synchronizing with the central server. This phenomena then proliferates out to the rest of my browsers when I use them. I've become very initimate with exporting my bookmarks frequently just so I have a backup. Kinda of aggravating. I hope they get that issue fixed at some point.
Posted by Unknown at 10:15 AM 1 comment:

Can't get Callisto to download through Eclipse 3.2 Update Manager

I keep getting exceptions when attempting to download the JAR files, no matter what mirror site I try. Works fine in Windows XP, but on Ubuntu Linux, the Eclipse Update Manager is useless for attempting to install Callisto from the Callisto Discover Site. I'll need to look into this again some time. I still prefer Jetbrains IntelliJ IDEA over Eclipse. And it works great on Ubuntu.
Posted by Unknown at 10:26 PM 1 comment:

I installed Ubuntu Linux 6.06 on a old eMachines laptop that Windows XP ceased working on. I had SuSE Linux 10.1 on the laptop initially, but it seemed very slow. So I went with Ubuntu and I've been very pleasantly surprised at the speed and ease of use of this distro. Getting used to sudo very quickly (Fedora Core and SuSE don't sem to make use of sudo much if at all). I have my Java development environment up and running (Java 1.5.0 Update 8, IntelliJ IDEA 5.1.2, DbVisualizer). I added MySQL 5.0.22 to the mix through the use of apt-get. I much prefer apt-get over finding RPMs and installing them through an RPM tool. Overall I'm becoming a big fan of Ubuntu Linux. BTW, I did have to pick up a different wireless networking card, as the built-in Broadcom networking in the laptop failed to connect to my wireless access points. I bought a Netgear WG511T network card, plugged it into the PCMCIA slot of the laptop and was up and running with WEP-encrypted wireless networking in about 30 minutes. It took me a bit to figure out the correct settings for the WEP encryption, but Ubuntu correctly found the new hardware and configured it on the fly. Very impressive.
Posted by Unknown at 10:18 PM 2 comments: 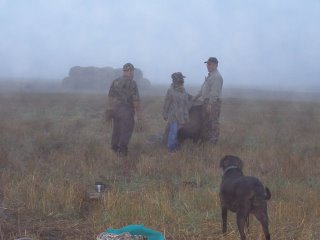 Well, hunting season has begun, and a bit earlier than usual this year. I bought a non-resident early goose season license for South Dakota and headed out to a field in NE South Dakota to try my luck with some others that take up residence in that fine state. The result...one goose shot, another flew away. We couldn't get anything to come into our decoys except for a lot of ducks. Unfortunately, they're out of season.

More pictures are available at my Picasa Web gallery...